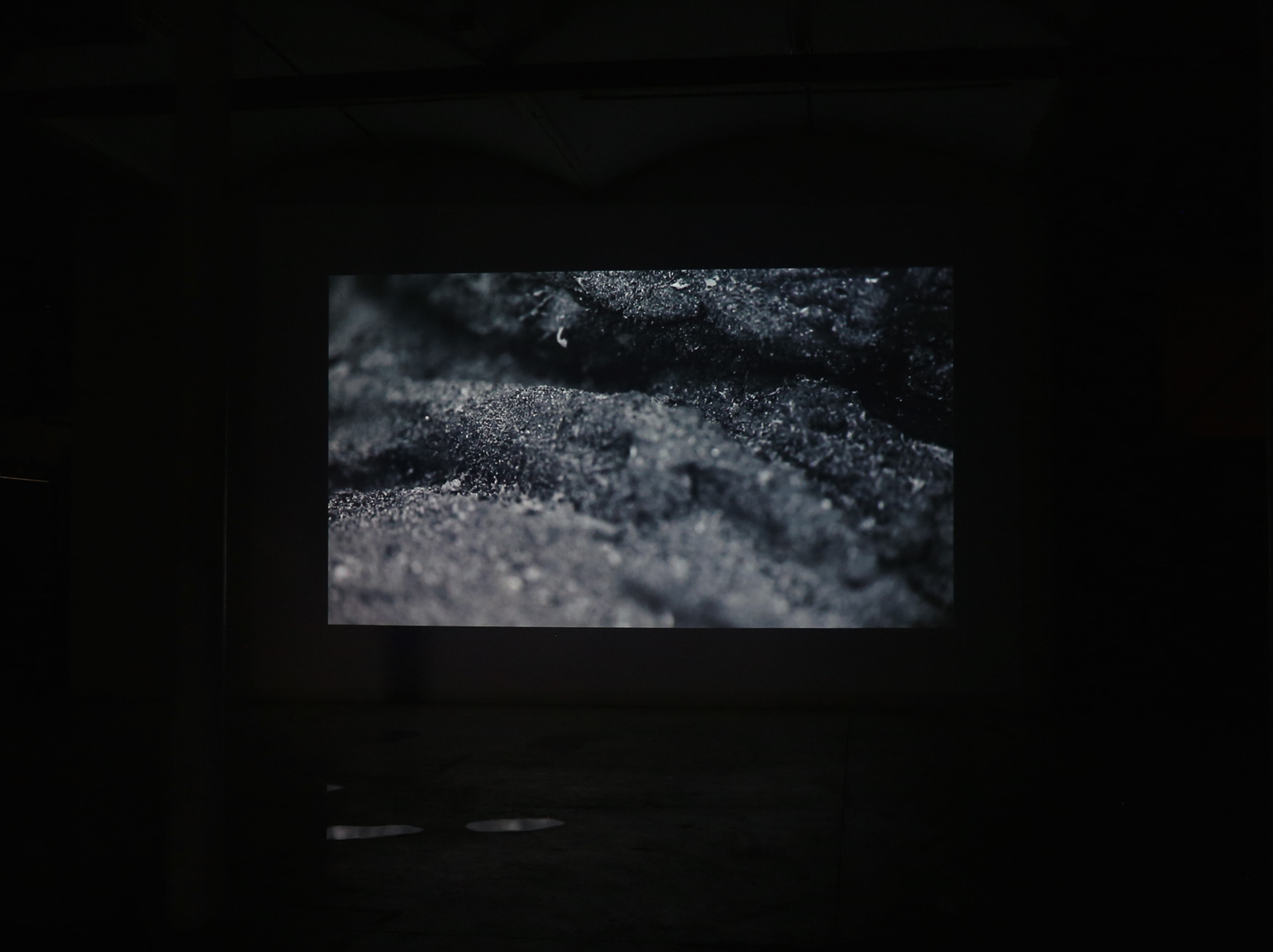 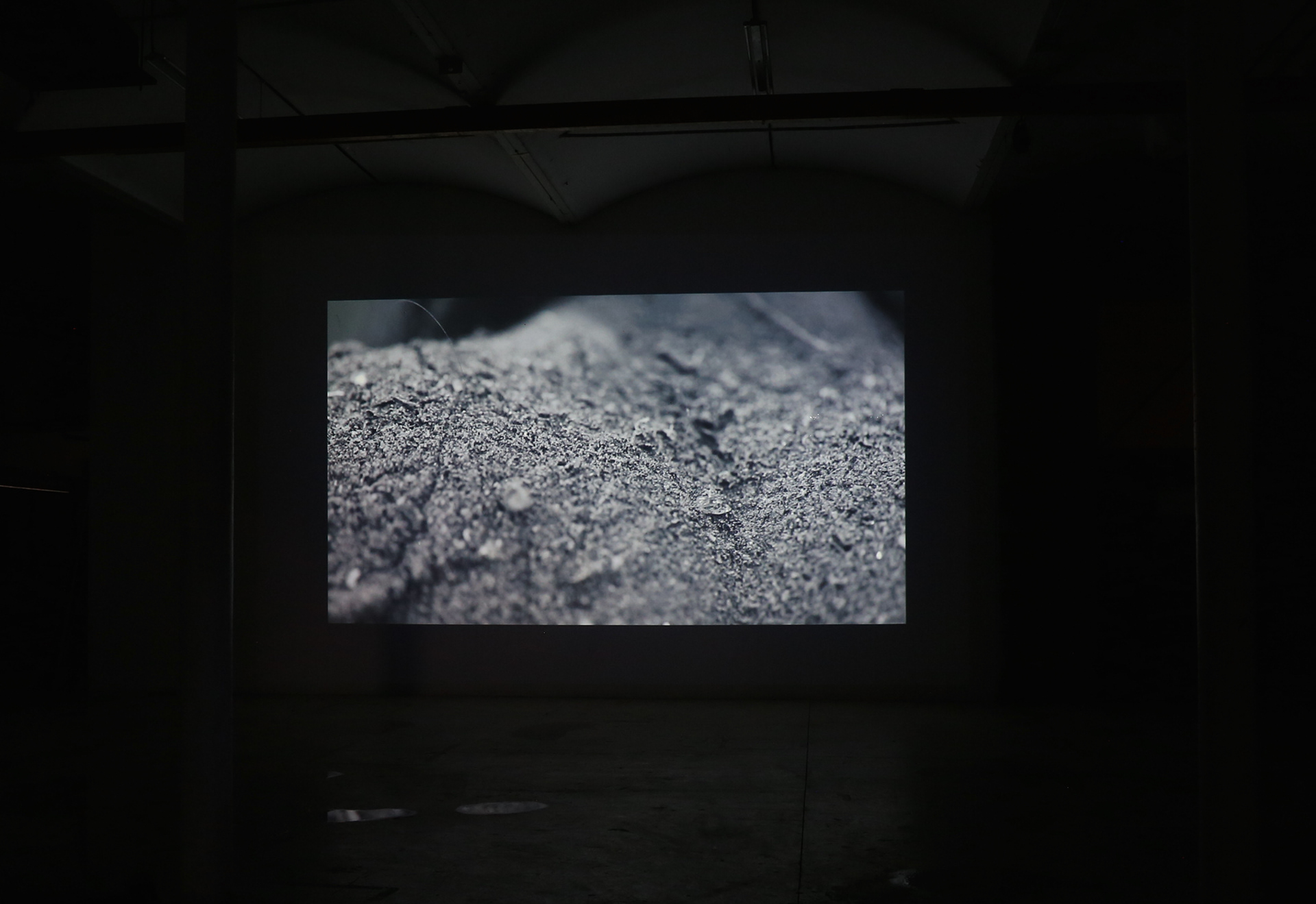 Ashes to ashes, dust to dust (1). Julia Varela’s installation made of crushed flat-screen televisions use force and power to grind everyday electronics into the particles which time and pressure would make of them in millennia to come. The flat screen has been a recurring object in Varela’s work which takes the banal rectangular object as a signifier of the mental prowess and popular control of contemporary image and media. Varela accelerates time and shows us the matter that is to come in a sinister slime of molecular detachment. It is the black sludge of our devices that grows daily into more stockpiles of unusable and unrecyclable matter. Unlike the human body, these chemical compounds are artificial and human-made artifices that now share our increasingly uninhabitable planet. The device is pulverised, but the particles gain a new agency, a new meaning on toxic earth. Piles of electronic garbage accumulate in the world’s poorest countries where they are stripped of copper and valuable metal before being burned into the earth’s atmosphere.

Hyperbolic consumption returns to the body through minute air-and-water borne particles. They are clogging the systems, poisoning the wells. The toxicity of the device has been amplified towards the destiny that we have created – without the technology to recycle these materials they remain a threat to the environment. Old technologies are not merely romantic ruins of human ingenuity. They are buried underneath our cities, sometimes emerging through slews of liquid waste. These new materials, human-made chemical structures previously unknown to the earth’s crust symbolise the materiality of the images we consume and their lasting physical effects.

The powder is arranged in rectangular patterns on the floor.  It is echoing the dead form of its former body, the plasma screen. The new powdered form and its monotonous colour create a new form of Malevich’s black square – the decimation of technological form in an environment spiralling out of human control. Not the death of painting, but the death of image and the death of nature as we know it. The powder is safe as long as it is settled, but like radioactive soil, it becomes dangerous when disturbed. This layer of electronic dust mixes with the radioactive remains of Nagasaki and Chernobyl in a planetary geological crust.

The film “Mehr Fantasie” combines the human body with these new agents of the earth. Plastered in a sinister mud, the human form is engulfed in its creation. A strangling overproduction of toxic crystals, ground by geological forces envelops the body into a new form. This body lives with malevolent soil, malignant air, pernicious fluids flow through its corpse.

1. Comes from an English burial ritual and is taken from the King James bible. This reference to the physical condition of the human body defines it as parallel to earthly matter. This was also referenced in a recent exhibition at DECAD curated by Lena Johanna Reisner which ran from 11 October – 15 December 2018. (https://decad.org/Tangible-RemainsHidden-Matters) Accessed 20 February 2019. 2. “The Body You Want: Liz Kots interviews Judith Butler”, Artforum, November 1992. Print.